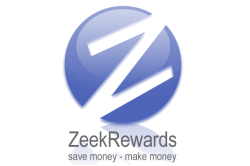 The owners of Zeek rewards is a group called Rex Venture which was created back in 1997 by a man named Paul Burks. Having over 14 years of experience in the MLM industry alone is enough to lose all my trust and for good reason. Zeek Rewards was an invitation only affiliate program which was connected to its other scam site, Zeekler.com, which was a penny auction site.

Since its start in January of 2011, Zeek Rewards was growing and becoming increasingly popular, in 2011 and through the middle of 2012 where it saw explosive and unprecedented growth which was probably in part due to the economy and more people seeking income online. Zeek Rewards had become one of the top 100 websites in the world by mid 2012.

However just like other ponzi schemes, it’s eventual fall was unavoidable, it was only a question of when. Here is a chart from their website Alexa showing the traffic rise and fall of the infamous ZeekRewards.com. 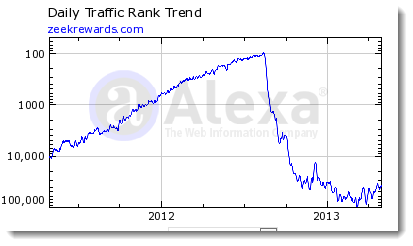 On August 17th, 2012 Zeek Rewards was officially shut down by the SEC. (Security and Exchange Commission) The shut down was due to allegations of running a pyramid/ponzi scheme that lured 1 million investors and has been called the 850 million dollar ponzi scheme.

Authorities say Paul Burks, the owner of Zeek Rewards was the mastermind behind the ponzi scheme that would become one of the biggest in U.S. history.

Burks himself drew out $11 million from the company for himself but was forced to pay $4 million of it as penalty to SEC as well as his company in Texas, Clifton Jolly along with all of its assets. It’s amazing how 1 million people were sucked in to that mess and be fooled by that scheme and is a great example on why you need to be extra careful with any websites that may be scams.

What Was Zeek Rewards?

Before being shut down by SEC this program was actually made up of 2 parts of a whole. There was ZeekRewards.com which was its affiliate advertising website and then there was its sister website, Zeekler.com, which was a penny auction website.

Zeek Rewards was a program with 4 levels of membership you could just including free, silver, gold, and diamond which cost a steep $99 a month. From that point you’d make money by having other people join and work under you in a pyramid set up.

All of the “profits” were sent to the top and distributed down while paying early investors with later investors money rather than from profits. It was no more than a well executed pyramid scheme that fooled a large number of people looking to make fast easy money online.

Paying early investors with the money of new investors rather than from profits is a classic hallmark of a ponzi scheme. Authorities alleged that 98% of incoming funds came from new investors, meaning to stay afloat the incoming had to equal or be higher than the outgoing.

By August 2012 Zeek Rewards owed far more to investors than funds available to pay them. Due to the likilyhood of the funds being completely exhausted and the fraud charges SEC froze all of their assets.

Like sheep to the slaughter the problem was the lack of information. Everybody was so excited about the easy money that they didn’t even know how the program really worked and near nobody questioned the legitimacy of the product they were selling. Zeek Rewards made themselves up to be the next big thing and everybody was too eager to jump right into it.

The Aftermath of Zeek Rewards Shut Down

Aftermath of a scam the size of Zeek Rewards is going to be felt by many. There was a big industry backlash after its fall as a whole lot of people were invested in Zeek Rewards, some peoples entire businesses were based on that platform.

Unfortunately Many of these brainwashed people (the ones closer to the top of the pyramid) continue to back the program because they were actually making money from it. They go and continue onto the “next big thing” and help more scams grow thus continuing the vicious scam cycle.

Most of these people move onto programs with a similar setup to this ponzi/pyramid program. This can cause serious backlash to the online industry and can hurt millions of people for the selfish gains of these scam programs.

My Final Opinion of Zeek Rewards

Any company that requires SEC to be involved and especially shut down by SEC is very bad news and I would steer clear of all of that. So definitely check out the company and the owners before hand.

If you check out someones background and find out that they have been heavily involved in Zeek Rewards I would absolutely steer far away from them, don’t take any advice from them and definitely DO NOT fall into anything they might be promoting to you.

The online world is safer because of SECs intervintion but there are always new programs coming out and with them are new scams so always keep your eyes open. Trust your instincts, if something feels wrong then it probably is.

Zeek Rewards at a Glance…

If you have a personal view on the Zeek Rewards program or maybe where ripped off by them i’d love to here from you and have you share your experience and how you view a program like that. Also if you’re tired of all the scams feel free to check out my #1 top rated product HERE! I also would just like to say thank you for taking the time to read this post and I wish you the best of luck!